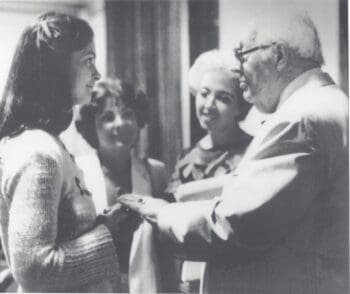 “Celia Linde is extremely gifted for the right interpretation of serious music on the guitar. Her technique is excellent and her musicianship exact, noble and expressive!”

“What a treat, so many aspects of guitar technique, unfolded with fire and authority”
Musical Opinion-London

Celia Linde is acclaimed for her personal style, her captivating temperament and for her wide range of musical interpretations.

In 1982 Celia Linde was selected to participate in a master course with Andrés Segovia at “Concervatoire de Musique de Geneve”. The legendary guitarist predicted a distinguished international career. He described Celia as a guitarist with true musicianship at her disposal, able to cover all of the difficulties and beauties of serious music.

Born of Turkish/Swedish parentage, Celia was raised in Sweden and presently resides in Malmö. She studied under professor Per Olof Johnson at the Malmö Academy of Music where she earned her Master of Arts. Celia then continued her studies at the Royal Danish Academy of Music in Copenhagen and earned a Master Soloist Diploma with highest Honors. After graduating in 1984, Celia arrived in New York to study with the renowned Brazilian guitarist Carlos Barbosa-Lima at the Manhattan School of Music, specializing in South American music.

Carlos Barbosa-Lima describes Celia’s gift for interpreting Latin American music in following epithet on the cover of her CD “Latin American Guitar Music”: “When I first heard Celia Linde, I understood immediately that she had a natural talent for the Latin American music tradition. She has just the right intuitive sensibility and good taste which is needed when you interpret these music styles which are so complex, developed from a culture where the guitar has its tradition.”

Celia Linde tours frequently throughout Europe, the U.S., Canada, Finland, Scandinavia, Russia, and Turkey. She is often the featured artist on National Swedish Radio-Television and has also been profiled on the BBC, Denmark’s Radio, Turkish Radio-Television (TRT), New York City’s WNYC as well as on other international radio stations.

In 1988, Celia Linde entered the international concert circuit with a brilliant US debut to a sold-out house in the Weill Recital Hall at Carnegie Hall. She presented the premier of the American composer Bobby Scott’s “Vera Cruz Incident”. Bobby Scott is best known for the title theme for the play “A Taste Of Honey”.

In 1992 Celia Linde was honored to be chosen to play a solo performance at the Olympics in Barcelona for heads of state, including the Kings and Queens of both Spain and Sweden.

Celia Linde is also noted for her interpretations of contemporary music and has commissioned a number of works for solo guitar and guitar with violin. Some of these are: Sven-David Sandström’s “Six Concert Pieces for Guitar and Orchestra”; Tommie Haglund’s “Beyond Farewell”, Erland Von Koch’s “Amoroso for Solo Guitar and “Duo Concertante” for violin and guitar, Reine Jönssons “Light, Shadows …Blue” and Per Nörgård’s “Intermezzi -Dirge or Dancing” for violin and guitar.

Celia Linde’s original guitar compositions such as “Highway to the Pacific” and “Fontaine Bleue” receive accolades from audiences and critics alike. Her dynamic solo programs consist of her own compositions as well as those dedicated to her. She also highlights composers from the romantic Segovian era as well as a full spectrum of Spanish and Latin American composers, Swedish rococo, Turkish classics and music from the baroque period.