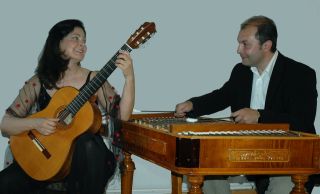 “The Duo Linde Mihalache” offers an international musical journey, drawing inspiration from Swedish, Balkan, and other sources from around the world, along with their own compositions and arrangements. Classical guitar meets the cimbalom, a stringed percusion instrument related to the hammered dulcimer with roots in ancient Persia. This instrument is normally used in gypsy orchestras as the Piano.

Cimbalist George Mihalache, a Gypsy native of Bucharest, Romania, began to play the cimbalom at the age of eight. George´s father is the famous accordion player Andrei Mihalache. His father needed a cimbalom player for his “Orchestra Mihalache”, so it was more or less destiny that little George pick up the cimbalom to play with his father. George grew up touring Europe with his father and the “Orchestra Mihalache”. In 1993 he permanently settled in Copenhagen and has since performed with some of the leading musicians in Scandinavia. He has also performed as a soloist with the Romanian Radio Folk Orchestra and Denmark’s Sjaelland Symphony Orchestra.