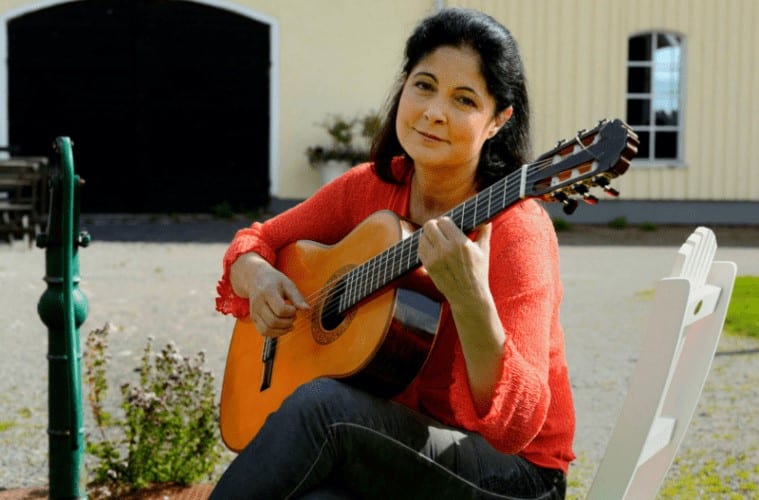 I don’t think I ever had the pleasure of seeing Celia Linde play in concert during my time in London as one of [the British version of] Classical Guitar magazine’s concert reviewers. That’s a great shame, as by all accounts she is a player of the highest caliber and sensitivity, and from my impressions from hearing this latest recording, those accounts are entirely justifiable.

Linde, of Swedish/Turkish parentage, has a great affinity for Latin and South American music, as can be seen by the track list. She has also studied with and toured extensively with the great Brazilian maestro Carlos Barbosa-Lima, who is truly one of the guitar’s great musical personalities. Her own compositions show depth and understanding of the tonal and musical possibilities of the guitar. One of my favorites here is Fontainbleau, inspired by attending a Django Reinhardt festival close to Paris, where she met Django’s son Babik; it is, appropriately, full of tango-laced swishes and Gypsy drama.

Like other guitarists who are exploring the great sounds of Chinese traditional music, such as Johannes Möller, Linde’s China Impression—which has three evocative movements: Winding Dragon, Mountain Mist, and Beijing Return—is giving air to a welcome world of music that is surely going to have greater popularity as time progresses.

Imelda’s Waltz is a nostalgic beauty, with Carlos Barbosa-Lima joining with Linde in the first of three guitar duets on the album, this one arranged by Barbosa-Lima, the other two (O’ Bailero  and Cavatina) by Byron Yasui.

The music of Colombian guitarist Gentil Montaña is gaining a thoroughly deserved popularity, as it is extremely catchy and engaging while also providing a suitably technical challenge for guitarists. Porro from his Suite Colombiana No. 2 is particularly delightful, and is popping up in all the right places, including this album. (Many years ago, I was most fortunate to be able to hear Gentil Montaña play at one of the Bolivar Hall concerts in London.)

The Venezuelan cuatro is a deceptively modest four-stringed instrument that can be played in the most virtuosic manner imaginable. Linde’s own Rumba Surprise is indeed full of surprises, featuring with guitar and Gustavo Colina’s cuatro and all manner of percussion, both vocal and instrumental. Moving down the South American continent, the Paraguayan dance chopi is one of that country’s most famous traditional rhythms, and it is wonderfully captured here by Pablo Escobar’s composition of that name, where the guitar is tuned to an open E chord, enabling it to impersonate the Paraguayan harp.

One could be forgiven to raise eyebrows at an attempt to arrange on of the greatest vocalise folk songs I know, Songs of the Auvergne by Joseph Canteloube; a particular favorite of mine being the versions sung by Natana Davrath. Here, O’ Bailero is arranged by Byron Yasui for guitar duet—it shouldn’t work but must admit it does. Bravo Celia Linde and Carlos Barbosa-Lima!

The album takes a surprisingly eclectic turn with a delightful miniature from Sofia Gubaidulina, Serenade. The longest piece on the album, Light Shadows…Blue by Reine Jönsson, is a contemplative, occasionally explosive piece that reminded me of music by the troubadours roaming the countryside of 13th century France.

This is a lovely recording, brimming with surprises and excellent playing.